Originally posted on 2014-04-18. Since this was first written, GeNIe has been acquired by BayesFusion and is unfortunately no longer freeware.

Statistics! No matter what you think about it, no matter if you like it or not, you cannot say that statistics isn’t useful! If you haven’t worked with statistics very much, some of it may feel a little blurry but when it comes to modeling uncertainty, you can’t get away from probabilities. This post will be about a particular branch of statistics called Bayesian probability. To be more precise, it will be about the statistical model called Bayesian networks. But first we need a bit of background. If you feel like you know what bayesian probability is all about, you should be able to skip this.

Thomas Bayes was a British statistician, most famous for formulating the theorem called Bayes' theorem. In its simplest form, the theorem looks like this:

P(A|B) should be read as “the probability of A being true, under the condition that B is true”.

If this sounds like complete mumbo jumbo to you, you aren’t alone. To make it easier to understand the theorem I will present a little example (completely made up!).

Now, say that Peter needs help and calls you. Before he explains his problem to you, the likelihood that he uses Linux is pretty small, only ten percent (as described above). But if Peter tells you that he experiences problems with his network configuration, is the probability of him using Linux still 10 %? It turns out that if you include this new information into your analysis, the probability of Peter being a Linux user rises to 42 %!

From the text we also know that

We already know what P(N|L) is, and we already know P(L), but the text doesn’t say anything about P(N). We can, however, calculate it. Since P(N) is “the probability that a user has network problems” it is the same as the summed probabilities P(N) = P(N|W)*P(W) + P(N|M)*P(M) + P(N|L)*P(L). The likelihood that Peter is a Linux user thus becomes

And when the likelihood of Peter using Linux increased from 10 % to 42 %, the likelihood of him being a Windows user decreased from 70 % to about 37 % while Mac stayed almost the same, a small increase from 20 % to 21 %. By using Bayesian inference it is possible to make use of extra information to make more accurate guesses about one’s environment. This method is for example used by so called Expert systems to make medical diagnoses.

The probabilistic model called Bayesian networks (or belief networks) makes, as the name suggests, heavy use of Bayesian probability. A bayesian network can be thought of as a visualisation of probabilities that in some way or another depend on eachother. A simple example (nicely presented on the Wikipedia article on Bayesian networks) is the relationship between rain, sprinkler usage and wet grass. The usage of a sprinkler depends on whether it has rained or not (which is why there is an arrow from the node ‘Rain’ to ‘Sprinkler’), and the presence of wet grass depends both on whether a sprinkler has been used and whether it has rained or not (the arrows that go to ‘Grass wet’). 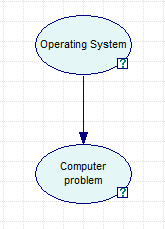 The known probabilities for each node are entered in the node properties. 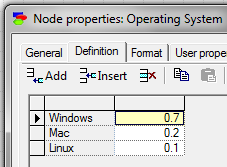 When the Bayesian network has been set up, it’s possible to set the observed evidence (the user had a network problem) and update the network. By then holding the mouse over the nodes, GeNIe displays the calculated probabilities (which gives the same results as our own “manual” calculations!). 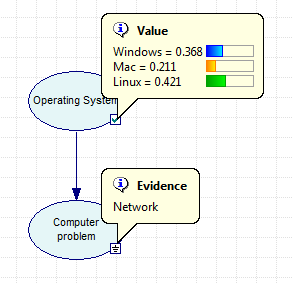 This method is a bit easier than, as we did above, doing all the calculations by hand. And by using SMILE (or any other library for Bayesian networks) in the programs you create, you too can exploit the usability of Bayesian networks!

Statistics! No matter what you think about it, no matter if you like it or not, you cannot say that statistics isn’t useful! If you haven’t worked with stati...

Imagine that you’re standing in your living room with your eyes closed. Now, you might have a mental map of the room and where the furniture are, but would y...

Yay! At last! The old ‘work-in-progress’ HTML site is gone from plankter.se, and instead this is here. Everything is not in place yet. I am still missing the...

Right, so I’m working on updating my website to a working condition again and am testing a framework called Jekyll.